Read an excerpt from Lessons From Prison 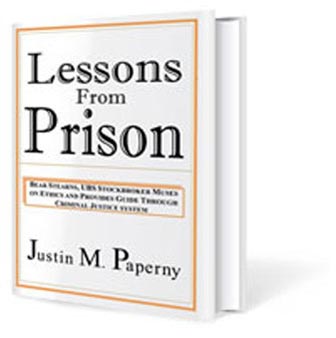 Lessons from Prison: As prosecutors devoted more resources to a criminal case, the more vested they became. That was the reason they offered the most favorable consideration to those who came forward soonest.

The worst decision a criminal defendant could make was to lie. I learned that the hard way.

When I initially retained counsel, I told him a story that completely cloaked my criminal wrongdoing. That ridiculous strategy may have been rooted in my humiliation, but it brought severe consequences.

“I could not bring myself to come clean. It was as if by lying I could somehow retain a self-image of respectability that I so desperately wanted to maintain. Once I told one lie, I had to cover it up with another.” Justin Paperny.

In time, I wasn’t only lying to my attorney, but also to government lawyers who insisted upon debriefing me. Without even comprehending the severity of my problems, I committed additional felonies with the lies I told.

Those who anticipated that they could become defendants in a criminal case could serve themselves best by understanding both the options available, and the ramifications that would follow the choices they made.

By not allowing myself to come to terms with the problems my decisions had created, I kept digging myself in deeper. Rather than acting assertively and working with a plan to bring about the best possible outcome, I was playing golf with my fingers crossed, ridiculously hoping that the government would be too busy to fiddle with what I perceived as a trifling matter.

From my own experience, and from what I learned by listening to others, I became convinced that too many defendants came into this system without a full appreciation for the cynicism and severity associated with every step in the process. Defendants wanted to believe that law enforcement officers, prosecutors, even the courts would understand.

In the white-collar criminal defendant’s mind, everyone in the system would recognize that he wasn’t really a bad guy, and that he didn’t deserve to be treated like a criminal. Such misperceptions make the defendant vulnerable to further problems.

The sooner a defendant accepted full responsibility, expressed remorse and demonstrated his contrition, the more he could influence his outcome. Those who believed investigators or prosecutors would identify with a criminal defendant, or that law enforcement officers would feel some sort of common humanity with him from the outset did not understand how justice was dispensed.

Those who made their profession in law enforcement identified with the losses of victims, not the struggles of criminal defendants. Justice to them meant a commitment to protect society and the people who suffered as a consequence of crime. Such a view conditioned those who worked in the law to attribute all actions by defendants to selfish motivations or self-preservation. Those who committed their careers to law enforcement listened as criminals told lies every day. Investigators asked questions that provoked defendants to incriminate themselves; the motive of law enforcement was to solve the case, not to ease the conscience of criminal defendants.

Too many defendants spoke with law enforcement officers in the same way I did. In the beginning, I felt certain that the government lawyers would see me for a nice guy. I lied with hopes that I could escape formal accusations of wrongdoing. The government knew that I was lying, but the investigators allowed me to continue. Each lie I told exposed me to further sanctions.

The many men with whom I spoke in prison convinced me that law enforcement officers relied upon a defendant’s feeling of vulnerability. They were trained to ask questions in ways that would strengthen the prosecution’s case, not to provide defendants with a way out. The Fifth Amendment to the constitution provided American defendants with the right to withhold answers to questions by law enforcement. It did not excuse them from the sanctions that would come to those who lied.

In Lessons from Prison I recount how those of us who served time in federal prison learned such lessons too late. An individual did not have to answer questions by law enforcement officers. If he did, however, the individual would serve his interests best by either speaking with complete honesty or not saying anything at all.

Once an individual had reason to believe that he might become a target of a criminal investigation, he should seek guidance from legal counsel. That decision seemed obvious. Many men in prison, however, did not grasp the importance of working honestly with counsel. Like I did, they sought someone who would affirm delusions that they would be okay. What a criminal defendant needed was an attorney who would throw a bucket of ice-cold water on him and shake him into reality.

A good consultant could help with sentencing preparations. Consultants could work with defendants to prepare them for both the presentence investigation, and for the sentencing hearing. Judges were accustomed to listening to defense attorneys expound upon the virtues of their clients. What they heard far less frequently were expressions of sincere remorse from defendants themselves. Sentencing consultants could help the defendant compile sentencing packages and coach them to deliver effective presentations during the hearing itself.

Following the sentencing hearing the defendant must be prepared to encounter the prison system. Proper preparations would ensure that he not only survived prison, but that he thrived through prison.

My having spoken with Walt before self-surrendering truly helped. I could identify with Walt’s background. Like I was, Walt was a college-educated executive who had never expected to serve a day in prison. Bad decisions led to criminal convictions and prison terms for both of us. Since he had gone through it all before, I found real value in speaking with him prior to beginning my term.

I had asked my attorney what prison was going to be like. He couldn’t answer in a way that would prepare me for the journey. I had read a book on the experiences of climbing Mount Everest. Yet if an aspiring mountain climber wanted to undertake the journey of climbing the world’s tallest mountain, he would do better to speak with someone who had reached the peak rather than seek information from someone like me who had only read about someone else’s experiences.

The worst parts about prison, I came to learn, were the months of anxiety that preceded it. Those who didn’t understand anything about life inside had a rougher go of the initial journey. They began their terms with the misperception that life in prison would be the same as life outside. It was not. There were rules, both written and unwritten. Not knowing and understanding them could lead to altercations with both prisoners and staff members. Those altercations could result in longer and more onerous terms than necessary.

Some of the lessons I learned from the other prisoners who began their terms without having a clue about prison culture were that some lived with too many misperceptions that were delivered through popular media, and that inappropriate adjustments at the outset could lead to an avalanche of problems.

The basic incoming process was an uncomfortable routine of paperwork, fingerprints, photographs, interviews and inspections. It was somewhat demeaning, but foreknowledge of it all helped steel me for the few hours of discomfort. As far as life in prison was concerned, those admission rituals hardly mattered at all. What did make a difference, on the other hand, was the way an individual adjusted as soon as he stepped onto the prison compound.

Even in a minimum-security camp, everyone’s eyes would be on the new guy. Some of the prisoners would have come from professional backgrounds, but others would be prisoners who had served many years or even decades of their lives inside prison boundaries. It was best for incoming prisoners to understand that a basic social structure existed, and those who violated prison protocols did so at their own peril.

Writing about prison adjustment patterns would require volumes of literature, much more space than a small book could provide. I served nearly 400 days in a federal prison. Through my blog at JustinPaperny.com, I tried to record much of my daily life. Each day of my journey, however, provided me with enough experiences to lead seminars on the importance of preparation.

To master the time inside prison boundaries, an individual needed to envision how he wanted to emerge. If he could start serving his time with that clear picture of how he wanted to walk out of prison then he could select the adjustment plan that would work best for him. Those who began serving their time without a plan, unfortunately, sometimes made bad decisions like Tom. In those cases, circumstances would complicate the adjustment, and prison would become a living hell.

If a person knew how he wanted to emerge from prison, then he could set clear goals in place. Those goals should have meaning and contribute to the individual’s overall life purpose. Those who focused only on getting through the sentence often found that they reached the end with an entire new set of anxieties that would hinder their ability to re-enter society. Thriving through prison required preparation.

Preparation began by developing a clear understanding of the prison environment. Tom wanted others to understand him before he had any idea of how the subcultures that dominate inside prison environments operated. Believing that he had to take a stand with the television led to his severe adjustment problem. His choice may have seemed an obvious lack of discretion, but during the time I served in prison I saw scores of prisoners who served difficult terms because of poor choices they made once inside prison boundaries.

You'll learn what evidence you need, what to say in your RDAP interview, 6 things you cannot say and more.