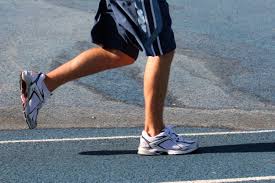 Apparently the 4 mile race has been changed around again. Another inmate tells me that the recreation officer changed the laps around the track from 16 to 12 laps, he said they measured the track and found that 3 1/2 laps is equal to 1 mile, this is a half mile less then what I count which is 4 laps to one mile. That just means I’m a little faster then I originally thought and I also run a little farther each day then I originally thought. I’m also being told that now because of so many inmates signing up for the 4 mile race there’s going to be three separate qualifying races next week, weeding out the slower runners for the yard day event. I went down to the gym to talk with the recreation officer to make sure that all this was true and sure enough he verified everything, saying that nearly twenty inmates signed up for the race and it was just too many runners to keep track of, so next Saturday there will be three separate 4 mile races and only the top three runners from each race will be able to run on yard day. I personally don’t think this is fair to everyone, but none the less I will continue to train hard each day, preparing myself for the qualification race and moving on to give it my best in the main event