It is still completely unreal to me that I am home for the holidays!  When I first surrendered to the federal prison camp at Taft in January 2015, one of the first things I did was try and figure out how many Christmases with Kenny I would miss.  I know, I know!  I was living in the future rather than the present but just for a little while!  🙂  At that point, it was possible that I would miss only two Christmases and that I would be home for Christmas 2017.  But in order for that to happen, everything would have to go perfectly.  I would have to qualify for and complete the Residential Drug Abuse Program (RDAP) and receive the full 12 months reduction to my sentence.  I would have to qualify for the full six months at a residential reentry center (aka “halfway house”) and I would have to qualify for home detention within 30 days of arriving at the halfway house.  The first part did happen as planned.  I was approved for RDAP by the psychologist at Taft in August 2016 and I transferred from Taft to the prison camp at Sheridan, OR on September 16, 2016 taking a Greyhound bus – unaccompanied – from Bakersfield to Salem, OR.  My first (and hopefully only!) Greyhound bus trip.  I already knew several guys at Sheridan who had transferred there ahead of me.  All of them said that Sheridan was much stricter than Taft (they were right) and they all recommended that I discontinue my blog while I was there.  I did not want to do anything that might risk completing RDAP and getting a year off of my sentence so I stopped blogging.

I started RDAP in early October of 2016 and was scheduled to graduate on July 6, 2017.  In February 2017, my Case Manager told me that the transfer of my case from the Western District of Texas to the Central District of California had been approved and that I had received the full six months at the halfway house in Rubidoux, CA and would transfer there on November 24, 2017.  So far so good!  I was beginning to think I would actually be home for Christmas 2017.  And then….in April of 2017, I was notified that my presence would be required in Austin, TX for the retrial that was to start on August 7.  Ugh.  At that point, I did not know how or when I would be transported but I hoped I would not leave until after I graduated RDAP on July 6 and got the year off!  Alas, I was called out of RDAP on July 3 and told to pack up all my things and bring them to the front lobby of the jail.  I knew at that point I would be shipped out on July 5 and that it would not be on a Greyhound.  🙁  Fortunately, the RDAP Coordinator was in the loop on my transfer and he made sure I graduated RDAP and thus, received my year off.

I have already regaled you with stories from my road trip which ended with my return to Sheridan on October 10; only 45 days until my transfer to Rubidoux!  I went to see my Case Manager to make sure all was still in order.  It wasn’t.  My halfway house date of November 24 had been rescinded while I was on the road.  Really? And, to make matters worse, several inmates were notified that their halfway house time was reduced from six to four months (or less).  It was looking like I would not be home for Christmas after all.  Then a few weeks later, my Case Manager called me in and told me she was able to get the Nov. 24 date reinstated.  Back on track!  And you know the rest of the story.  Four days after I arrived at the halfway house, the judge signed a motion authorizing my immediate release.  I would be home for Christmas! 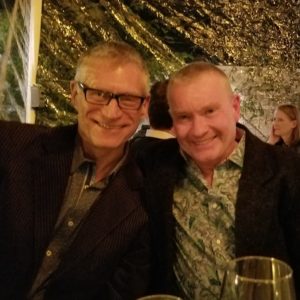 Ken and I at Copley’s

So you can see why I titled this post “A Christmas Miracle.”  It has really felt like one!  My Mom and Les arrived on the afternoon of the 23rd and Ken and I got to spend three wonderful days with them.  All of you know how great my Mom has been over the past three years and I could never repay her for all of the support and love she gave me.

Mom (Lue) and Les at Copley’s

I know she will read this and say, “I was just doing what any Mom would do.”  But that’s not true.  She went above and beyond and I will be eternally grateful.  As a small token of our gratitude, Ken and I took Mom and Les out to dinner at Copley’s in Palm Springs on Christmas Eve and we truly had a wonderful and memorable evening.

For Christmas, our dear friends Lisa and Gary joined the four of us for dinner.  So fun!!

I have been home a little over a month now and I am SO HAPPY!  It hasn’t all been perfect of course.  There have been a few bumps in the road – which I will write about in my next post – but life isn’t perfect.  But so far my re-entry has exceeded my expectations and I am so excited to see what each day brings.  The best part of the Christmas Miracle remains waking up each day with Mr. Ken and Tito Puente – our little family.

I hope all of you who celebrate Christmas had a most wonderful one and that those who don’t have had a wonderful holiday season!