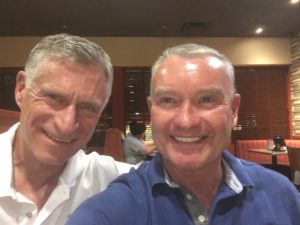 I’m home! I’m home! I’m home!!! I know many of those who receive my blog posts know that I was released on November 28 but I think it bears repeating, don’t you? The last several days have been a whirlwind. You may recall that my sentence was due to end on May 21, 2018 and that I was transferring to the halfway house in Rubidoux, CA on November 24.  Well, two days before Thanksgiving, a motion was filed asking the court to reduce my sentence to time served. We had not heard anything by the time November 24 rolled around so I was driven from the Federal Prison Camp at Sheridan, OR to Portland airport early the morning of the 24th by the Camp “Town Driver” (who is an inmate) for a flight to Ontario (closest airport to Rubidoux). I must say that it felt a little strange to be flying without being completely shackled. I much prefer Alaska Airlines to ConAir! The halfway house was a clean, well maintained facility and the staff were very professional and courteous. However, I was disappointed to find out that there was a moratorium on transitioning to home confinement so it seemed the only chance for getting home soon was the motion that had been filed.  Before I would be allowed to leave the halfway house property, I had to go through orientation with the manager of the facility who was on vacation until Nov 29 or 30 so I was stuck at the facility for a very looooooong weekend.

Early Tuesday afternoon, Nov. 28, I was sitting out in the courtyard reading a book when a staff member walked up to me and said, “Mr. Applegate, you have been released.  You are free to go home.”  The motion had been granted and they just needed a copy in order to release me which arrived a few minutes later.  I just sat there and cried.  I was going home!  I ran to the pay phone to call Kenny (my attorney had already informed him) and he took off work, jumped in the car and came to take me home!!  There is a short video on Facebook documenting this incredible moment.  One of the things I love about Kenny: he actually thinks of these things!

Since that moment, I have been completely overwhelmed. My “to do” list is a mile long. BUT most of that can wait because my top priority is spending time with Mr. Ken (and Tito Puente!) but I’ll share some highlights.  When we arrived at our little mid-century house in Palm Springs at dusk on Tuesday, Ken went inside and I hung back so I could surprise Tito Puente.  We have a wall around our house and I stood on the outside while Kenny let Tito Puente out of the front door.  He immediately raced to the spot where I was located and started barking hysterically. I think he recognized my smell – after almost three years!  When I opened the gate and he saw me, he jumped up in my arms and gave me hundreds of kisses.  He got so excited he started hyperventilating.  Ah, I missed him so much!  He has hardly left my side since I have been home.

But the best thing about being home is being with my husband Kenny again and that I CAN SEE HIM, TALK TO HIM, HUG HIM, KISS HIM ANY TIME I WANT!  That means everything to me.  Our first night back together, we just took it easy.  We stopped at the grocery store and picked up a couple of steaks (steaks!), some sushi (sushi!) and stuff for salads.  Ken has learned to cook while I was a way but he is more than happy to turn that responsibility back over to me.  It was so nice to be in the kitchen fixing a meal.  What an incredible simple pleasure.  Before dinner though, we had a spa.  I have been looking forward to getting back in that spa for three years!  It did not disappoint!  We had dinner outside and then closed the evening with some time by the firepit watching the tram go up and down the mountain.  I have never been more grateful in my life.

Before I close, I want to thank everyone who wrote, emailed and visited me at Taft and Sheridan. You lifted me up every day and reminded me that relationships are the most important thing during our short ride on this planet.  Thank you! Thank you! Thank you!  I also appreciate that all of my close friends have given Kenny and me the space to get reacquainted. Of course it helps that no one has my brand new cell number!  🙂

I have learned so much over the past three years and I am very much looking forward to a wonderful life.